Continuing on with my topic of “The beautiful game”, today I’m sharing the story of a group of boys in the village of Koh Panyee in Phang Nga Province in Thailand.  The village is notable for being built by Indonesian fisherman completely on stilts. 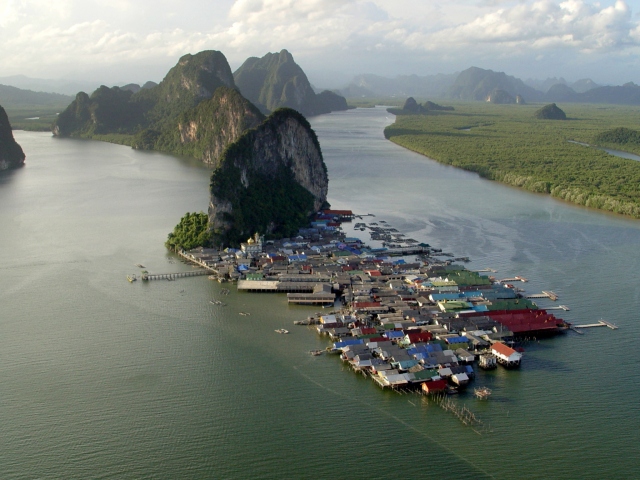 This true story is about a group of boys who lived in the village in 1986 and loved watching soccer on TV, but they had no place to play it themselves.  Not to be deterred, they decided to build a floating soccer field where they could finally play the game they loved. Through their own efforts they managed to build a floating field, and even though they would often end up in the water chasing the ball and playing on wood planks that had nails sticking up, they finally had the field that they wanted.  Eventually, they decided to participate in a tournament on the mainland.  They initially thought that they weren’t good enough to do very well in the tournament, but they ended up making it into the semi-finals.  The semi-final game was on a very rainy day and they went down by a score of 2 – 0 in the first half. At the half-time break they decided to take off their soccer shoes and play the game the way they always played it at home, in bare-feet.  They were able to come back and tie the match, but in the end they lost due to a late goal.  But they were so proud of what they’d done, plus with the strong encouragement of the other villagers, they decided to build a much nicer floating soccer field than the one they originally played on.  And they’ve been very successful in tournaments ever since.

This is a heart warming story about a group of young men who were determined to have a soccer field, and were willing to do whatever it took to get one.  The video is nicely produced and with the captions it’s easy to follow the story and share in the sense of accomplishment by the boys.  There is a wonderful contrast between the majestic beauty of the surroundings versus the small cramped space that the villagers called home.  It’s also a great introduction to the life of the villagers of Koh Panyee which seems to be a very tight-knit community.  The video has a very light-hearted  feel to it with a young boy’s voice narrating the video while happy native music plays in the background.